Gathering and updating this information will help to inform our own research in the area and, over time, influence policy to help reduce GBV. It will also help to inform the None in Three game aimed at young people in Brazil.

Below is broad policy context information related to gender-based violence. For contextual information linked specifically to our research topic in Brazil, click here.

Brazil, officially the Federative Republic of Brazil, is the fifth largest country in the world by territorial area (equivalent to 47.3% of the South American territory) and sixth in population.

The largest country in both South America and Latin America, Brazil has a population of over 211 million. It is currently classified as an upper-middle income economy by the World Bank and a newly industrialised country, with the largest share of global wealth in Latin America.

Timeline of Women's Rights in Brazil

Brazil Establishes the Statute of Children and Adolescents (ECA)

The Child and Adolescent Statute (ECA) was approved by the National Congress as the legal framework that brought together demands from social movements that worked in defence of the idea that children and adolescents are also subjects of rights and deserve access to citizenship and protection. The ECA was published under Federal Law No. 8069.

Convention of Belém do Pará

The Inter-American Convention to Prevent, Punish and Eradicate Violence against Women, or Convention of Belém do Pará as it became known, conceptualises violence against women as any act or conduct based on gender that causes death, harm or physical, or sexual suffering to women, both in the public and in the private sphere. Adopted in Belém on June 9, 1994, it recognizes violence as a violation of human rights and establishes the obligations of the signatory States to curb them – including Brazil, where the Convention came into force from Decree No. 1,973, of 01/08/1996.

Establishes compulsory notification of cases of violence against women that are assisted in health services, public or private, throughout the national territory.

Safernet Brasil starts to receive and tabulate allegations of rights violations on the internet, generating the first data on violence and discrimination against women in a virtual environment.

It became the main legal instrument to curb, punish and prevent domestic violence against women in Brazil.

Law No. 12015 on crimes against sexual dignity

Law No. 12.015/2009 provides for crimes against sexual dignity and amends the 1940 Penal Code. With the amendment, in addition to carnal conjunction, libidinous acts and violent indecent acts also became a crime of rape.

The Women’s Call Center – Call 180 is a free telephone service provided by the Secretariat of Policies for Women of the Presidency of the Republic (SPM-PR), which was created in 2005 so that the Brazilian population, especially women, can receive guidance and denounce situations of discrimination and gender violence, in their various forms.

Law No. 12,845: mandatory assistance to people in situations of sexual violence

Establishes that people in situations of sexual violence are entitled to comprehensive care, which includes: specialised psychosocial care; diagnosis and treatment of physical injuries to the genital tract and other affected areas; facilitated record of the occurrence and referral to forensic examination; pregnancy and STD prophylaxis; collection of material to perform HIV test; preservation of material that can serve as legal evidence against the aggressor (under the responsibility of the doctor and the health unit or IML).

The Femicide Law is sanctioned

The Federal Constitution recognises, from Law nº 13.104 onwards, femicide as a crime of homicide.

The law that amends the Civil Code and prohibits the marriage of minors under 16 years of age was sanctioned (Law 13.811/19)

The code had previously allowed the marriage of minors under 16, as long as authorized by their parents, to avoid serving a criminal sentence or in case of pregnancy.

Brazil has non-discrimination laws in hiring women and the law mandates equal pay for women and men for the same or similar work. Economic inequality between women and men, however, is a persistent problem.

‘Abortion is illegal in Brazil except in cases of rape, when the mother’s life is in danger or foetuses with anencephaly (a 2012 adaptation). Although abortions are against the law, and data on abortion incidence is not systemically collected, it is estimated that over one million abortions are performed in Brazil each year. 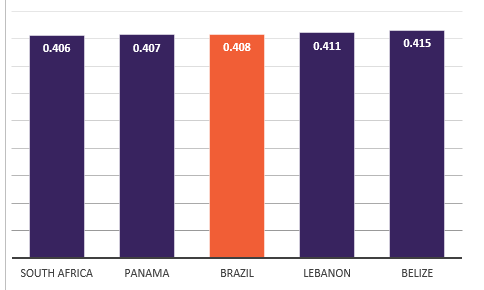 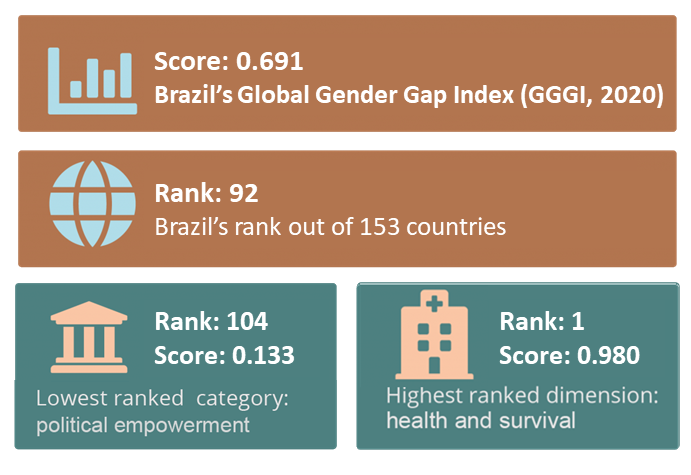 Global Gender Gap Index (GGGI) assesses gender gaps on economic, political, education, and health criteria. Values range from 0 to 1, with lower values indicating more disparities between the genders. According to the Global Rankings Report 2020, Brazil’s GGGI is 0.691 (rank 92 out of 153 countries). The lowest rank recorded for Brazil was on the political empowerment subindex (score: 0.133, rank: 104), followed by economic participation and opportunity subindex (score: 0.653, rank: 89). Brazil had a high 1st rank on health & survival (score: 0.980). Over 60% of women in Brazil are participating in the labour force, compared to over 80% of men. 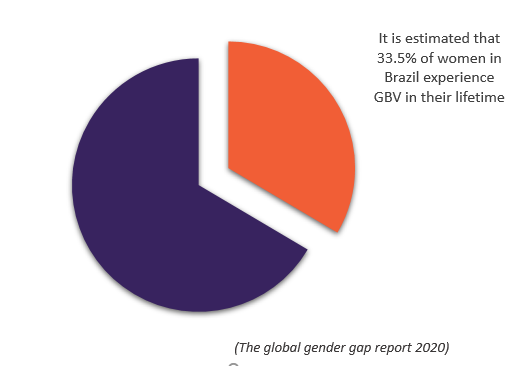 The None in Three Brazil ‘Emilio’ project is funded by End Violence Against Children as part of its ‘Safe Online’ programme. Our research focuses specifically on youth-perpetrated online sexual exploitation and abuse of young people. We are using our research to inform development of a serious, educational game, aimed at Brazilian youth, to help them recognise and prevent such abuse. Click to view our policy hub page on Online CSEA for policy context on our particular research topic.